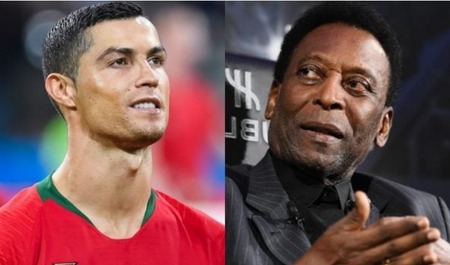 Pele, the legendary Brazilian footballer, has expressed gratitude to Portugal captain Cristiano Ronaldo for bringing him joy. While recovering in Sao Paulo’s Albert Einstein Hospital, the 82-year-old was responding to Ronaldo’s comments on Instagram.

On Sunday, Ronaldo stated that he would never abandon his teammates or his country.

The 37-year-old stated this in a lengthy Instagram post following Portugal’s exit from the 2022 FIFA World Cup on Saturday.

The five-time Ballon d’Or winner was unable to save Portugal in their World Cup quarter-final loss to Morocco.

In a lengthy message, Ronaldo said,

“I fought for it [the World Cup].” I worked very hard for this dream. I scored five times in five appearances.

Ronaldo said in a lengthy message,

“I fought for it [the World Cup].” I put in a lot of effort to reach this goal. Over a 16-year period, I played in five World Cups, always alongside great players and supported by millions of Portuguese fans. Nothing should be left on the field. “I never gave up on that dream or stopped fighting.”

“Unfortunately, the dream came to an end yesterday. It’s not worth it to react to heat. I just want you to know that no matter how much has been said, written, or speculated, my commitment to Portugal has not wavered. I was always the one fighting for the common goal.”