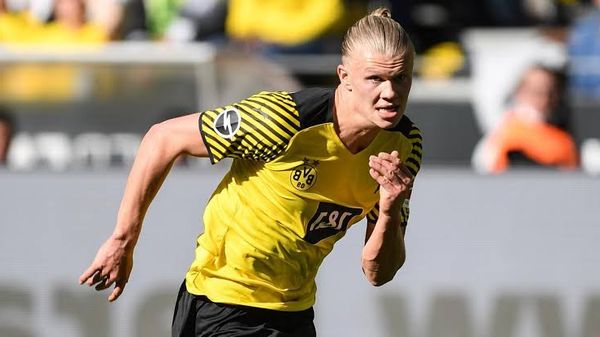 It has been a wide celebration for all Manchester City fans across the globe, as Guardiola confirmed yesterday that they had reached an agreement with Dortmund striker, Erling Haaland over the transfer to the club were reached.

Although, The 21-year-old, striker, is among the hottest young talents player in the world of football with a record of 85 goals in 88 appearances for the Bundesliga side, and has been tipped to take Pep Guardiola’s side to a new level. But a number of clubs were interested in the Norwegian, and a report from ESPN has revealed why he’s ended up at the Etihad.

Manchester United was heavily linked and there was a theory that the club’s decision to sack Ole Gunnar Solskjaer – a close friend and former international teammate of Erling’s father, Alfie – worked against the club, but the report insists that wasn’t a factor. Haaland had a good relationship with Ralf Rangnick from his time at RB Salzburg and the decision to snub United is said to simply be because they are ‘no longer competitive in the Premier League and Champions League.’

A source explained that;

‘Chelsea scouts raised concerns about whether Haaland’s style of play would be suited to the Premier League because there’s less space for forwarding players to attack and run into, compared with the Bundesliga.’

About others, Barcelona and Real Madrid, the report continues: ‘Recruitment staff at Barcelona reported back that they had reservations about his personality and character. Real Madrid took issue with his injury record although there’s an acceptance from the Spanish club that it didn’t put them off completely, and there was a point around February when even those involved in City’s bid believed he may end up at the Bernabeu.’

The revelation of all this-, came from Haaland’s close friend, who said,  Haaland, claim an interest in him was weighed up in terms of their “sporting project”, with the manager, style of play, and ability to be successful key in his decision to move to Manchester City.