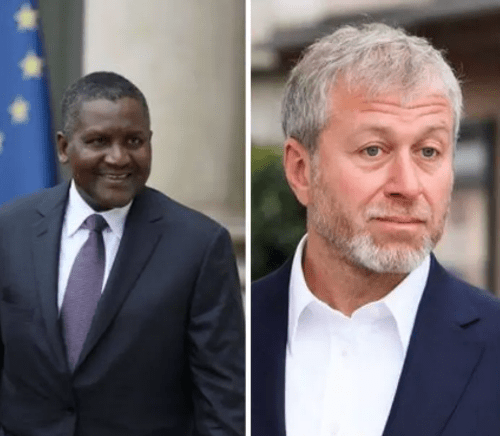 Roman Abramovich is expecting to receive and consider bids to sell Chelsea Football Club from a variety of interested parties this week.

The Russian billionaire gave up ownership of Chelsea amid heightened tensions between his nation and Ukraine and may now be forced to sell the club completely.

That might provide a chance for Aliko Dangote, Africa’s wealthiest man, to pounce and realize his longstanding ambition of owning a major Premier League team.

”I’d want to purchase the team eventually, but I keep repeating we have $20 billion worth of initiatives to focus on. I’m attempting to complete the firm so we can start in 2021.” Dangote stated in 2020.

An outsider’s valuation of a Premier League team is between £150m and £350m, whereas a top-six club is worth

Dangote is financially capable of purchasing a top Premier League team, but with Kroenke being recalcitrant, it may be time to shift his focus away from Arsenal and toward their rivals, Chelsea.

Abramovich is under a lot of personal pressure right now because of his rumored connection to Russian President Vladamir Putin, which gives Dangote a chance to rush in and take advantage of.

Abramovich had previously rejected proposals of roughly £2.2 billion to acquire Chelsea, but he was not in the same state of public anguish as he is today.

Dangote, who has a $14 billion net worth, may use the previously rejected offers to determine where to begin bidding, and there is a larger possibility he will succeed this time around given Roman Abramovich’s present position.

However, there is a caveat that Chelsea owes Abramovich over £1.5 billion in loans, according to Evening standard, which might complicate any negotiations since those debts would have to be paid in addition to whatever price Roman believes is reasonable for the club.

It is important to stress that this is entirely hypothetical;

However, it would be incredible to have Nigeria’s and Africa’s wealthiest man control Chelsea, a club with massive support in Nigeria and across Africa.