What can say about Chelsea’s pre-season fixtures in July? Only team that can stop Chelsea 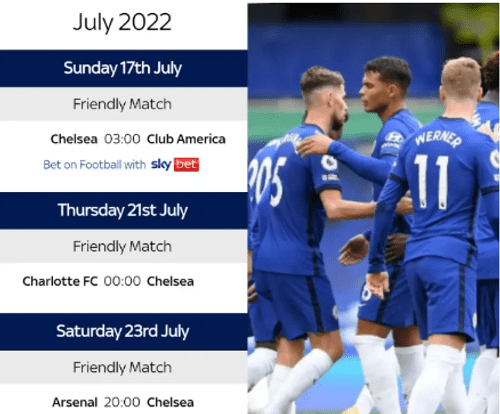 The new season is rapidly approaching, and clubs will once again embark on pre-season tours. Thomas Tuchel and his team will embark on an exciting pre-season tour of the United States in preparation for the new season. Everyone, including the Academy players, will be hoping to make an impression on Tuchel and earn a spot in the first-team squad for the upcoming season. Let’s take a look at the opponents Tuchel’s men will face in preseason; Chelsea first game will see them take on Mexico’s most successful club, Club America, in the FS Series Clash of Nations. The two teams last faced each other 13 years ago in Texas when goals from Franco Di Santo and Florent Malouda sealed a 2-0 victory for Chelsea. Without doubt, Chelsea are favourite to win this game, yet again. Chelsea’s next opponent will be Major League Soccer’s Charlotte FC at Bank of America Stadium. The blues are no doubt favorites to win this game. Chelsea has confirmed that this game will take place on the 21st of next month. Chelsea’s final preseason game will be against rivals Arsenal on July 23, 2022, at Camping World Stadium in Orlando, Florida. Both teams will compete for the so-called “Florida Cup.” This is the only game I believe Chelsea will have difficulty winning. In comparison to Arsenal, who has made some fantastic signings in recent months, the Blues have yet to make any new signings.

Chelsea has already lost Rudiger and Christensen, and Tuchel will be forced to field amateurs in defense, which Arsenal could exploit. This game has the potential to derail Chelsea’s perfect preseason record.

What can you say about Chelsea’s preseason fixtures? Do you see Arsenal defeating Chelsea when they meet in the Florida Cup next month?