“We did it,” Messi writes in an emotional message to Argentina following the thrilling World Cup final victory over France 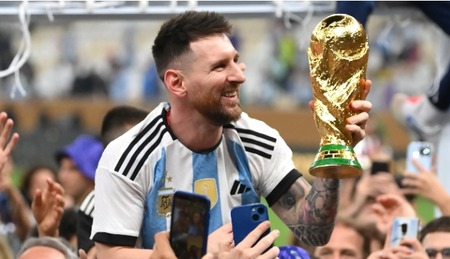 Lionel Messi has posted an emotional message to his fellow Argentines after inspiring a thrilling victory over France in the World Cup final.

Finally, an all-time great has won the global crown.

Involved in a stunning victory over Les Bleus
Will not retire to another country
WHAT HAPPENED?

After waiting his entire career to win the biggest prize in football, the seven-time Ballon d’Or winner finally followed in the footsteps of Diego Maradona in 1986 by capturing global glory at Qatar 2022. He lifted the World Cup as captain of his country after scoring twice in a 3-3 draw with Les Bleus over 120 minutes and again in a nail-biting penalty shootout.

“WORLD CHAMPIONS!!!!!!!! I’ve dreamed it so many times, wanted it so badly that I still haven’t fallen, it’s unbelievable. Thank you so much to my family, everyone who has supported me, and everyone who has believed in us. We show once again that when Argentines fight together and unite, we are capable of accomplishing what we set out to do. The merit belongs to this group, which transcends individual differences; it is the strength of all who are fighting for the same dream, which is also the dream of all Argentines… We succeeded! Argentina, go! We’ll be seeing each other soon.”

Messi broke more records while assisting Argentina’s world-beating victory, becoming the first man to score in every round of a 32-team World Cup and claiming a record-breaking second Golden Ball.

Messi had stated prior to the final that said fixture could be his last for Argentina but, with 172 caps and 98 international goals to his name, the iconic 35-year-old has said that he now intends to “continue playing as a champion”.