VIDEO: Good news this afternoon as Barca star spotted in airport to join Chelsea after amid transfer move 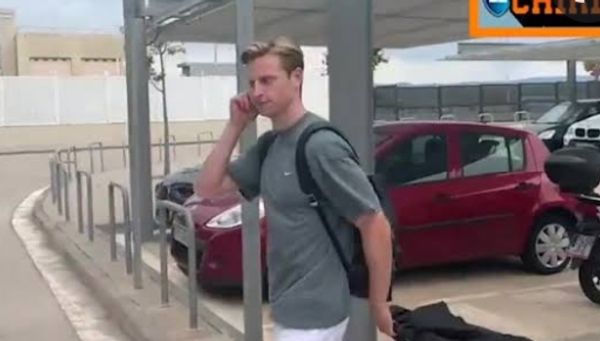 Chelsea target Barca midfielder, Frankie de Jong spotted in airport ready to joined the Blues on a summer transfer window move as he head to London.

No doubt, the Blues hoping to close a great deal for several targets before the transfer window closed down as two Barcelona stars are among the ranking to joined Chelsea as they amids transfer move.

Earlier on, Aubameyang was spotted heading to London as a deal was thought to be finalized then but sadly for Chelsea it’s yet to be concluded as the Gabonese was named on the bench yesterday.

Chelsea already have their pursuit for the Barcelona star, Aubameyang heightened as they also edge closer Frankie de Jong.

Frankie de Jong who on his own end refused a Barcelona exit has although started considering other options as he perceives his game time will be reduced this season at Barca.

Meanwhile, the Dutch man was spotted at the airport this afternoon heading for London.

We understand that the player’s trip to London is as a result of the off-days handed to the Barca squad which he chose London as the place to spend time and also will be attending Donny Van de Beek’s wedding.

See the video of de Jong heading to London below.