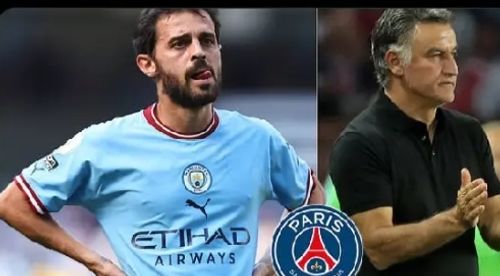 Without much doubts, Premier League giants Manchester City football club will most definitely remain keen on challenging for more trophies in the new 2022/2023 football season.

The Premier League giants enjoyed a good run of form for the most part of last season as they edged out Liverpool to win the prestigious Premier League title under manager Pep Guardiola.

Manchester City football club have also started the new season on a good note and are currently on top of the Premier League table after gaining six points in their opening two matches. But now, Manchester City football club could be rocked with reports that experienced attacking midfielder Bernardo Silva is currently attracting interests in this summer transfer window.

The 28-year-old Portugal International, who signed up for Manchester City football club after departing Ligue 1 side AS Monaco back in 2017 has been an important member of the team.

The experienced attacking midfielder was heavily involved for Manchester City during the 2021/2022 season where he scored 13 goals and created seven assists in 50 appearances in all competitions.

His impressive performances in midfield is believed to have caught the attention of Paris Saint-Germain and according to reports from Daily Mail, the Ligue 1 giants are keen on signing him. The reports further claimed that Paris Saint-Germain are really interested in Bernardo Silva and are now preparing a bid worth up to £59million to lure him away from the Etihad Stadium.

It is believed that Paris Saint-Germain manager Christopher Galtier is a big fan of Bernardo Silva and he is willing to add the experienced midfielder to his ranks before the transfer window closes.

But then, it remains to be seen if the proposed £59million transfer bid will be enough to convince Manchester City football club into offloading Bernardo Silva this summer.