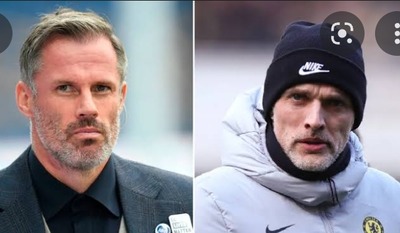 Chelsea fans and top sports analyst, have called for the sack of Thomas Tuchel, as the Blues spends £278.5 million on transfer window deal alone, which they believe, it is waste, if the Chelsea manager, no in the coaching job very well.

Although, According to some Chelsea fans, they described Thomas Tuchel has one of the best managers in the biggest clubs across Europe.

Meanwhile, Liverpool legend, Jamie Carragher said this while admitting that the former Borussia Dortmund boss may be under pressure following Chelsea’s record-breaking spending spree in the just concluded transfer market, as he called for his sacked, if that was expenses on the transfer window..

With Auba, it cost Chelsea £278.5 million so far with others signing a huge amount spend on summer. Where key projects should have been included.

This made Chelsea the club with the highest spending in a single window ever.

EPL: Michael Owen predicts for Man United vs Arsenal, Liverpool vs Everton, Chelsea vs West Ham, and others

Asked if the spending has put Tuchel under pressure, Jamie Carragher said,

“Yes, that is the name of the game for any top club, and that has always been the situation at Chelsea.

“It will be interesting to see if the change in ownership changes how ruthless the club was with managers under Roman Abramovich.

“But, for me, Thomas Tuchel is one of the best managers in Europe, he’s a Champions League winner, and right now in the Premier League it’s been tough competing with Manchester City and Liverpool.

“Chelsea did need a rejig at centre-back given the players they lost, so you can understand why they have had to go into the market. But there is no doubt they have paid big money for some of the players.”