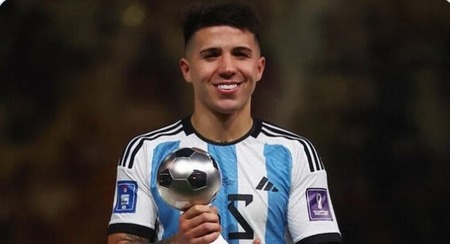 Enzo Fernandez, a Benfica midfielder and Argentina World Cup star, has agreed to join Chelsea in the January transfer window, according to transfer expert Fabrizio Romano.

Despite the fact that Fernandez agreed to join Chelsea in January, the Blues have yet to reach an agreement with Benfica for the 21-year-old midfielder.

Chelsea wants to offer Benfica a large fee rather than paying his £106 million release clause, but Benfica has previously stated that they will not sell the midfielder for less.

Meanwhile, Liverpool and Manchester United have expressed interest in the player but have not made an offer.

Meanwhile, according to the Daily Mail, Chelsea are making progress in contract negotiations with N’Golo Kante.

Kante’s contract with Chelsea expires at the end of the season, and the Blues are confident the 31-year-old midfielder will stay with the club.

Kante, who won the World Cup with France in 2018, has struggled with injuries this season and looked set to leave Stamford Bridge when his contract expires next summer.

Chelsea and Kante are both said to be confident that a deal will be reached soon, but the contract length remains a sticking point, with the two parties unable to reach an agreement.

The Blues are offering Kante a two-year contract with a third-year option, but the 31-year-old midfielder is reportedly looking for a longer deal.

Both Barcelona in Spain and Al-Nassr in Saudi Arabia are interested in signing Kante as a free agent at the end of the season.