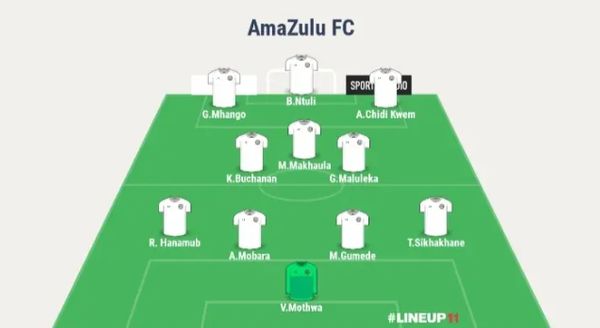 AmaZulu possible starting XI against Swallows FC as both teams set to slug it out in the South Africa Premier League, SPL, for tonight’s DStv Premiership encounter at 7:30 p.m.

The Mother City side Cape Town City 2 -1 at home in Premier Soccer League encounter on Saturday, 13 August. It was a game full of action as Usuthu managed to pull up a strong come back to collect all the 3 points.

AmaZulu are among the few clubs in the league who haven’t yet recorded a loss this season. Having played 3 games in the league, they have managed to record 2 wins and 1 draw. They are currently positioned on number 3 in the PSL log with 7 points.

However, they are up against a side that recorded a goalless draw in their third game of the season against Maritzburg United. Birds seem dangerous at home, as they have defeated Cape Town City 3-2.

The head coach might opt for the starting eleven that he used in his previous match against Cape Town City.

The Usuthu shot-stopper has proved to be a man one can trust behind the goals as he was included as part of the squad in all Usuthu’s previous matches this season.

The star has provided an assist of Mhango’s brilliant stunner that won them the match against Cape Town City.

He played 90 mins of their previous match against Cape Town City.

The former Mamelodi Sundowns came up with an assist of the goal that Chidi Kwem scored against Cape Town City. He has proved to be a regular in Truter’s squad as he played in all matches played thus far.

The former Orlando Pirates forward has already netted two goals in 3 games this season as a result of this outstanding performance the coach would want him as part of the first eleven.

The Usuthu forward already has one goal in the league, a goal he scored against Supersport United.

The striker scored the first goal in their previous game against Cape Town City.