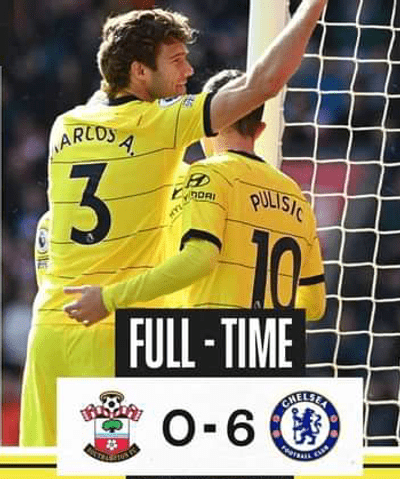 Chelsea bounced back to winning ways in grand style today when they travelled to face Southampton at the St Mary’s Stadium on Saturday evening.

The Blues had a stunning performance in the match as they thrashed the Saints 6-0 thanks to goals from Marcos Alonso, Kai Havertz, and braces from Mason Mount and Timo Werner.

Well, several Chelsea fans have become over-excited about the team’s victory today even though they are on the verge of exiting the UEFA Champions League this season.

SOU vs CHE: 4 key players that will miss Chelsea’s crucial game against Southampton

It longer news that Real Madrid thrashed 3-1 Chelsea in the UEFA Champions League some days ago. In my opinion, I see the Blues’ victory today as a fluke and shouldn’t cause any worry for Real Madrid ahead of their second leg tie.

Southampton were thrashed today because of their poor defending and lack of offensive threat which gave Chelsea the chance to have a great game.

Real Madrid aren’t going to let six goals get past them in a match and it is very rare you see such happening. Chelsea’s performance today remains a fluke until they can get the job done against Real Madrid in the UEFA Champions League next week.