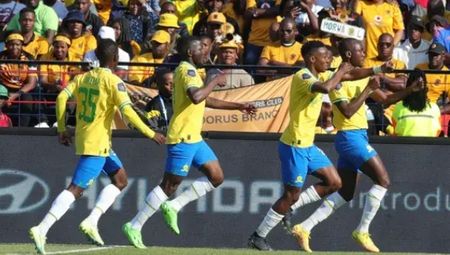 Sekhukhune United will take on Mamelodi Sundowns thid weekend’s significant victory over Kaizer Chiefs when they take on Sekhukhune United for the Premier Soccer League match at Peter Mokaba Stadium. The Brazilians play their second away game of the season, and this time they are in Limpopo Province.

Sundowns are returning to continue their pursuit of a record-extending sixth league championship after recently thrashing Kaizer Chiefs 4-0.

The decisive victory over the Chiefs may have been a sign of purpose, which could worry Sekhukhune. Babina Noko have not fared well in this campaign and now have to deal with a roving Masandawana.

However, the fact that Sundowns were defeated 1-0 at home by TS Galaxy right before the Chiefs triumph could give Sekhukhune optimism.

After opening the campaign with a 2-0 victory over Cape Town City in the Western Cape, Sundowns is making their second journey of the year. Rivaldo Coetzee, a midfielder, is still questionable regarding his fitness despite originally claiming to be over a long-term injury.

But since March 2022, he has not participated in a match.

For the game on Saturday, Grant Kekana, Lebohang Maboe, and Erwin Saavedra are also questionable.

The Brazilians might use Bongani Zungu, who recently joined the team again.

Sundowns has scored six goals in its first three league games and will play Sekhukhune, which has allowed two goals so far this year.

However, Sekhukhune will like to keep their unblemished home record.

Brazilians won 2-0 away from home in May’s matchup between Sundowns and Sekhukhune.

Masandawana had also triumphed 2-0 at home in the reverse match in November 2021.