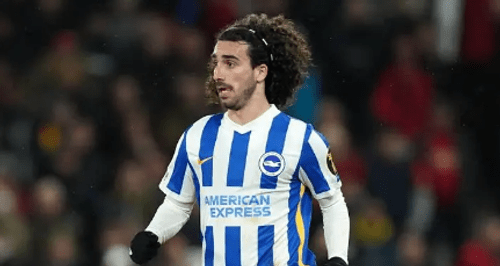 The West London based club are considering a move for highly-rated Spanish defender Marc Cucurella from EPL side Brighton and Hove Albion this summer transfer window.

According to various reports, The English Premier League giants Chelsea are set to table a reported 45 million euros to bring him to Stamford Bridge next season. The 23 years old Spanish left-back have been linked to major clubs around Europe which include Chelsea, Manchester City, Manchester United and Tottenham Hotspur.

The highly-rated defender Marc Cucurella have reportedly dropped a transfer request to his club as he aims to play for a top club next season. According to various reports, The German and Chelsea head coach Thomas Tuchel has shown full interest in bringing the left-back to Stamford Bridge this summer.

The Blues are set to submit their first official bid in the next couple of weeks as they aim to finalize the deal before pre-season games. The Spanish defender Marc Cucurella registered 1 goal and 2 assists in all competitions this season.