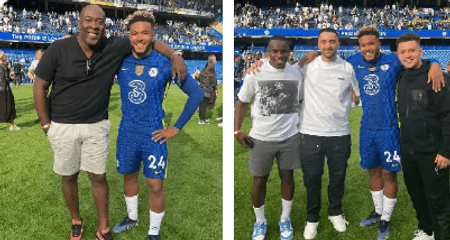 Thomas Tuchel’s Chelsea side defeated already relegated Watford side 2-1 in their final Premier League game of the season at the Stamford Bridge on Sunday.

Ross Barkley who was playing his 100th game for Chelsea, headed in a great cross from Reece James three minutes after Watford’s Dan Gosling had equalised for Watford.

However, after Chelsea’s final Premier League game of the season on Sunday, England and Chelsea defender, Reece James has taken to social media to show off his daddy and some of his family members at Stamford Bridge on Sunday.

Reece James tweeted: “Old man ft Couple members” alongside a picture of himself and his daddy, Nigel James and a picture with his family members at Stamford Bridge on Sunday. This tweet from Reece Jane showing off his father, Nigel James and some of his family members at Stamford Bridge has attracted reactions from fans, as some have applauded the England international, saying they are proud of him while some have sent love to him.

Here are some screenshots of reactions from fans: