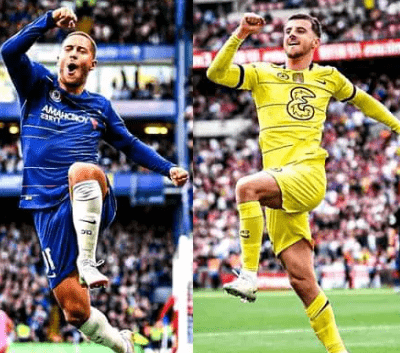 After a disappointing exit from the Champions League, Chelsea bounce back in the FA Cup to book their third consecutive FA Cup final with a 2–0 win over Crystal Palace on Sunday at the Wembley Stadium.

They would now face Liverpool for a repetition of the Carabao Cup final in the FA Cup, as the Jurgen Kloop’s men defeated Pep Guardiola’s Manchester City side to book their place in the finals.

Although, Crystal Palace made it hard for Chelsea to break them down, as it required a better second half perfomance from Chelsea to score the first goal through Ruben Loftus-Cheek, and a second goal through Mason Mount.

One important event that was noticed in the game, was a Chelsea player adopting the goal celebration of Eden Hazard, who was in the stands watching the game live at the Wembley Stadium.

In the report, we will be writing on the Chelsea player that is gradually adopting Eden Hazard’s goal celebration after scoring for the club.

The Chelsea midfielder has been in the form of his life for Chelsea this season, having contributed 26 goals in over 40 appearances for the club,12 goals and 14 assists, which has become the best season of his career so far. He was seen to adopt the Eden Hazard goal celebration against Crystal Palace, where he runs to the corner flag, raising one of his leg as high as possible, and then send a punch to the air.

The Chelsea fans has seen a lot of that goal celebration, when Eden Hazard was still with the club. It is unfortunate how the career of the Belgium international has turned out to be since he left the club for Real Madrid in 2018.