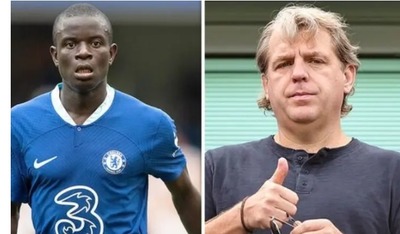 Despite Kante’s injury saga, N’golo Kante contract talks is still on with the Blues’s board over the extension of Chelsea midfielder, which Todd Boehly yet to agreed with the fee he demanded for to continue playing for the Blues.

Although, clubs have been targeting the
31-year-old star player as a free agent next summer. In talks between Chelsea and Kante began last year but were halted as ownership of the west London club switched hands to a consortium led by Boehly.

According to the Athletic, Kante is holding out for a longer deal than the two-year offer on the table with an option for a third year, according to the verbal commitment from Boehly’s side.

However, it remains to be seen if Boehly and Kante can agree on a deal to form a longer working relationship as the France international would be able to start talking to potential new clubs from the start of 2023. Kante has featured in just two games this season for Chelsea due to injury.

Kante, once player for Leicester City in 2016 before he joined Chelsea as he set up which lead the club to win the Champions League and the Club World Cup during his time at Stamford Bridge, with the major role he played.

SOU vs CHE: Kante and Kovacic out, Chelsea midfield trio can help the Blues wins against Southampton tomorrow

No doubt, N’golo Kante, truly stand out, following his track record, as the best midfielders in the world, but it is clear if he will leave Chelsea for nothing if negotiations cannot be resolved among him and Todd Boehly.