New Michael Essien on the transfer target, as Chelsea interested to sign the PSV star for £30 million 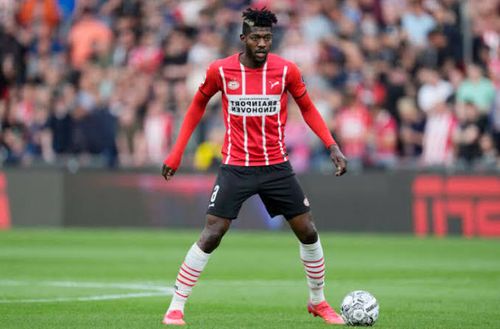 Chelsea is currently targeting PSV midfielder Ibraham Sangare in the next summer transfer opening if officially announced in to obtained players or sell.

According to reports,  Sangare has been the major target for key clubs like Manchester United and Tottenham to get this star signed to their clubs if he finally agreed to joined any of the club.

Although, Chelsea has joined the race to get this PSV midfielder signed as they have been watching closely at Stamford Bridge about the player skills of played, best for the club if he agreed to be signed for £30 million.

He has acted as an impressive force at the heart of PSV’s midriff, helping them reach the Europa Conference League semi-final and finish second in the Eredivisie.

Ibrahim Sangare, who is 24-year-old, ranked second overall in the Dutch top flight for interceptions made per game (2.5), eighth for passes per game (70.7) and for tackles per game (3.3).

Clearly a well-rounded performer, it is no surprise the English clubs have apparently looked favourably upon his skill set. Especially as he could cost as little as £30m (Mirror), the same price Chelsea paid for N’Golo Kante in 2016.

If Sangare can become the next Kante, then the Champions League holders would be wise to snap him up before someone else does. The PSV star has actually previously been compared to another figure extremely well known and loved by the Blues.

Transfer News: Chelsea enters the race for €150 million Uruguayan striker, as the Blues make inquiry before

“I saw Essien at the start of his career and they had the same physical strength at an equal age.”

Essien forged a reputation in South West London for being an imperious presence in Chelsea’s midfield.

Largely playing alongside Frank Lampard, the Ghanian pretty much held down a spot in the side from his arrival in 2005 to his departure some seven years later.

So, we’ve potentially got the next Essien on our hands; how very intriguing.

There is clearly a great expectancy for Sangare to reach certain glittering heights, heightened by the reviews handed out by those close to him.

“He’s one of the greatest players I’ve had at Toulouse,” said his former manager Alain Casanova.

“His first touch is one of the best I’ve seen.

“He’s calm in small spaces and comes out of pressure in incredible ways. He’s also got a great ability to recover the ball, and does a huge amount of running.”