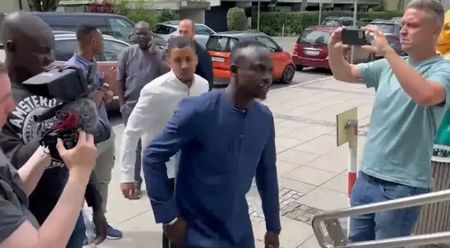 Senegalese forward Sadio Mane has arrived in Munich for a medical ahead of his €41 million transfer from Liverpool to Bayern Munich, with his native attires showing the love he has for African outfits.

His arrival was confirmed by Bayern’s sporting director: Hasan Salihamidzic, with Liverpool, expected to pay a fixed fee of €32 million for Mane. An additional €6 million will be paid based on Mane’s appearances and, another €3 million, based on individual and team successes.

In contrast to a three-piece suit or sportswear, which most footballers wear to their medicals, the Senegalese captain and AFCON winner was pictured wearing native attire. The 30-year-old was donned in a stunning navy blue African senator outfit, with a dashing embroidery along the neckline.

Mane has regularly, shown his love for turning up at big occasions in his native attires. At the 2019 CAF Awards, the current African footballer of the Year ditched the regular three-piece and a black tie for another stunning outfit. The attacker’s presence at Allianz Arena has been rumoured for weeks, with Bayern Munich being extensively linked with him.

He indicated before the Champions League final that he would be announcing his future after six years at Anfield.

After Liverpool’s Champions League final defeat to Real Madrid in May, the 30-year-old told the club of his wish to go. Bayern Munich were the early favourites to sign the attacker since the German club needed to invest in their front line after losing star striker Robert Lewandowski to Barcelona’s attempt to sign him.

During his time with the Reds, he won the Champions League, Premier League, FA Cup, Carabao Cup, UEFA Super Cup, and Club World Cup. In his six-year at Anfield, Mane appeared in 269 games for Liverpool and scored 120 goals.