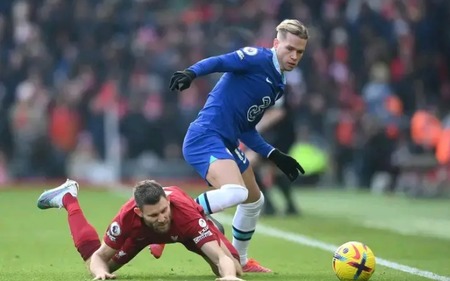 The disappointing seasons of Liverpool and Chelsea were summed up in a 0-0 draw at Anfield on Saturday, which did little to improve their chances of finishing in the top four in the Premier League.

Liverpool vs Chelsea: Both clubs are nine points adrift of the Champions League places after a point apiece, and there is little evidence that either can quickly rekindle their former glories and make a charge up the table.

Early on, a goal scored by Kai Havertz was ruled out for offside, and new 100 million euro  signing Mykhailo Mudryk showed flashes of promise off the bench.

However, the Blues remain in 10th place after failing to win an away league match since October.

Liverpool climbs to eighth place, one point ahead of Brentford on goal difference.

Meanwhile, Jurgen Klopp described Liverpool’s 3-0 loss to Brighton last weekend as the worst performance of his eight years at Anfield and, in the 1,000th game of his managerial career, made sweeping changes, leaving Fabinho, Jordan Henderson, and Trent Alexander-Arnold on the bench.

The personnel change had little effect on the Reds’ performance, as they were penned back in the first 45 minutes by a similarly out-of-sorts Chelsea.

Graham Potter’s men took the lead after just three minutes, when Havertz slotted home after Thiago Silva hit the post from a corner.

However, after a VAR review, the German was ruled to be offside.

Liverpool’s two best chances before the break came from Cody Gakpo, but it was the visitors who came closest to breaking the deadlock when Benoit Badiashile’s header from another dangerous set-piece was well saved by Alisson Becker.

Klopp’s half-time team meeting had the desired effect, as the home team took the lead early in the second period.

Despite this, they were unable to create a clear-cut chance, as shots from Gakpo and Naby Keita were blocked inside the area.

Mudryk had to wait for his chance, but his introduction 10 minutes into the second half sparked Chelsea into life, as he fired into the sidenetting after some quick footwork.

Chelsea Injury Update: Graham Potter provided an injury update for Chelsea players ahead of their match against Liverpool

Darwin Nunez’s introduction from the bench had a similar effect on the Liverpool attack, but the Uruguayan, too, was unable to break through.

Nunez’s shot after a rampaging run lacked the power to beat Kepa Arrizabalaga, and he teed up Alexander-Arnold to slice Liverpool’s best chance of the game wide.

After stalemates in both the League and FA Cup finals last season, which Liverpool won on penalties, the sides met for the third time in a row.