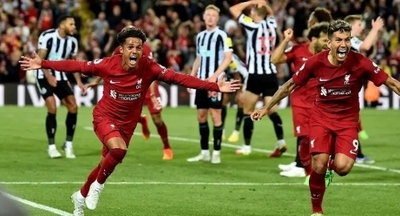 The English Premier League’s fifth round of games resumed as teams competed to move up the league standings while the league’s top teams tried to hold onto their position atop the standings.

Liverpool, who are thought to be championship contenders, haven’t played like one since the season’s first two games, which they drew, and their third game, which they lost to Manchester United. Liverpool had a difficult time defeating Newcastle United and needed a goal from Fabio Cavalho in the 98th minute to secure the victory.

Despite winning their fourth game handily with a 9-0 victory over Bournemouth, Liverpool struggled to defeat Newcastle. Although there were numerous debates about why the match official continued play despite the addition of five minutes of extra time, the official was correct in accordance with football regulations.

The fourth official specifies the minimum additional time set by the referee at the end of the final minute of each half, according to law 7 of the football laws of the game, which was followed perfectly by the match official for the evening, Andre Marriner.

This means that the 5 minutes indicated was the absolute minimum amount of additional time that could be played. However, the rule also contains a clause that fully supports what occurred in the Liverpool game because it states in its final sentence,

“The additional time may be increased by the referee but not reduced.”