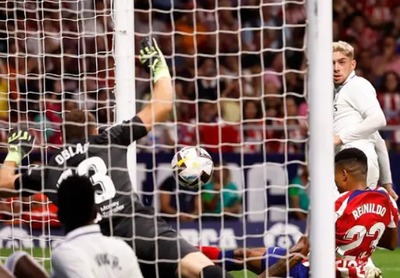 Real Madrid continues their good start in the Spanish La Liga as they make it six wins on the bounce, with a 2-1 win against their city rivals Atletico Madrid at the Wanda Metropolitano on Sunday evening. Real Madrid scored two goals in the first half through Rodrygo Goes and Federico Valverde, with second-half substitute Mario Hermoso scoring for the Rojiblancos before being sent off for two bookable offences. Here are the three best players in Real Madrid’s win over the Rojiblancos.

The Brazil international deputised for Karim Benzema in the number 9 position and didn’t disappoint. He scored the first goal, and was a constant threat to Atletico Madrid’s defence in the game. The Uruguayan midfielder had a great performance and was on the scoresheet once again. The Real Madrid midfielder scored the second goal of the game after pouncing on Vinicius Junior’s effort. The French midfielder is proving game after game that he is a perfect replacement for Casemiro as he put in a stunning performance against Atletico.

He set up the first goal with a beautiful pass to Rodrygo.