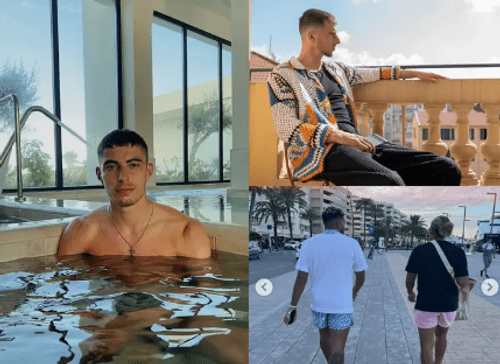 Chelsea football club attacking midfielder or false nine Kai Havertz got a short break away from football matters as he relaxes in a swimming pool following few days of training with the German national team.

Recall that the midfielder linked up with the Germany national team camp on international duty a day after the Barclay premier league season came to an end, he is finally afforded a rest abet for just one day before he continues with the national team as they prepare to take on Italy in the opening game of the UEFA Nations league. Kai Havertz in the swimming pool via Instagram photos.

Meanwhile other Chelsea players have been engaged in different activities across the continents while the likes of Thiago Silva, Ngolo Kante, Timo Werner and the already mentioned Kai Havertz are gearing up for more football actions with their national teams, Mason Mount and Reece James are already having the best of summer holiday. Reece James is at the famous Ibiza with his sister Lauren while Mason Mount have been touring Monaco at the on going grand prix in France.