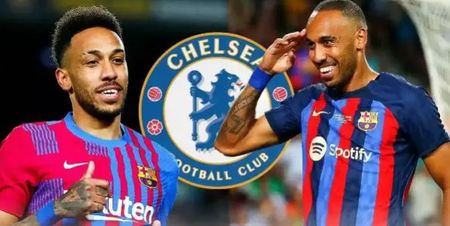 Chelsea have tabled the sum of £23 million to signed formerly Arsenal captain according to reports. The Gabonese international has been linked with a return to the Premier League as Thomas Tuchel is keen to start him upfront on his attack line.

Tuchel who coached Aubameyang at Dortmund is desperate to seal his transfer after loaning record signing Romelu Lukaku to Inter Milan this summer. Timo Werner has also sealed a permanent move back to RB Leipzig.

The former Arsenal captain joined the Catalans on a free transfer in the January after a brich of rules which saw Arsenal terminate his contract. Spanish journalist Gerard Romero on his Jijantes FC Twitch channel reported that The Blues have submitted an official bid worth £22 million which matches Barcelona’s asking price. The Blues will now wait for the striker to make a decision on his future.

Chelsea had earlier gone ahead and proposed £12 million but went ahead to increase their bid after United joined them in the race to sign the striker. Chelsea are willing to offer the 33-year-old a pay increase, more than what he is getting at Camp Nou.

Xavi isn’t open in letting the forward leave having scored 11 times in 17 La Liga appearances last season. The club are open to putting the striker to sale having brought in Lewandoski this summer.