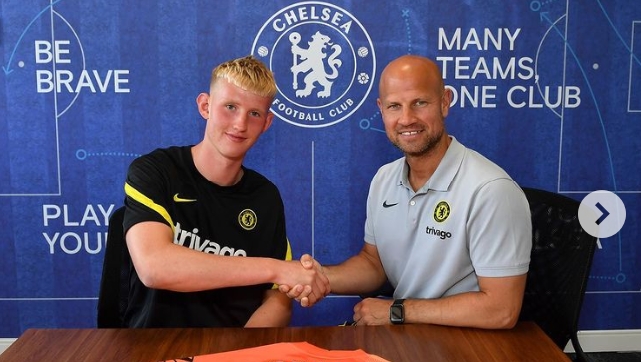 Todd Boehly, New Chelsea owner, made it clear on air, that he has been releasing enough fund to the Blues manager, Thomas Tuchel to get youth and vibrant players signed in the squad to make a first team, but an the interesting part of this youth players is to build them up and get the players in future.

The assistant officials working alongside with Tuchel, specialized on youth academy, chiefs Neil Bath and Jim Fraser, Boehly has signalled a real willingness to pursue the game’s top talents, with a number of big names brought in to bump a youth setup which was sewing the seeds for a push like this even before the American’s arrival.

Former Wimbledon manager Mark Robinson joined as the new boss of the development side, while young starlets like Mason Burstow, Travis Akomeah, Leo Cardoso and Kiano Dyer all arrived before the sanctions on the club brought the fun to a halt.

With the Blues once again free to spend money, Boehly has been aggressive in the youth market to ensure there is no repeat of last season, in which the development side came within minutes from relegation from the Premier League 2.

He might not even be finished for the summer, with interest in Peterborough’s Ronnie Edwards and frequent reports linking Palmeiras sensation Endrick and Inter’s Cesare Casadei with moves to Stamford Bridge.

For now, here are the youngsters who have joined in Boehly’s first window.

Eddie Beach was actually the first player Chelsea signed in the Boehly era (there’s one for a pub quiz), with the young goalkeeper putting pen to paper on a move from Southampton.

A Wales Under-19 international, Beach was a regular for a Saints side that finished top of the Under-18 Premier League South table last year, coming six places and 16 points ahead of Chelsea.

Beach was promoted to the Blues’ Under-21 setup for the PL2 opening day drubbing of Wolves and should be a regular starter for Robinson’s side.

Out of nowhere, Chelsea swooped to bring in attacking midfielder Omari Hutchinson from rivals Arsenal.

18-year-old Hutchinson was one of the stars of the PL2 last season and has been surrounded by real excitement for a good few years now. His signing – a free transfer after his contract expired – is the textbook definition of ‘a coup’.

Known for his dazzling dribbling and love of racking up both goals and assists, Hutchinson was tipped to go on loan earlier this summer. A final decision is yet to be taken.

A deal for Brighton’s Zak Sturge was wrapped up soon after Boehly’s arrival, although administrative reasons saw the transfer delayed a few months.

Left-back has been a problem position for the academy for a while now, with Dylan Williams joining from Derby in January to help out, and 18-year-old Sturge is seen as the fix.

There are high hopes for Sturge, who made a solitary PL2 appearance in Brighton’s final game of the campaign last year.

Okay, Gabriel Slonina doesn’t really count. The 18-year-old goalkeeper, who was close to joining Chelsea before Roman Abramovich was forced to sell the club, has joined from MLS side Chicago Fire in a huge deal which could end up being worth over £12m.

A prospect who has generated immense excitement on that side of the Atlantic, Slonina has returned to Chicago on loan for the remainder of the calendar year before making the move to Chelsea in January 2022.

There will be no major academy minutes for Slonina when he does make the move. The USA international has a lot of first-team experience already and will be looking to maintain that in Europe.

Again, another senior signing here. Carney Chukwuemeka has a huge reputation in English football and his £20m move from Aston Villa is all the evidence you should need of that.

The 18-year-old midfielder was the star of England Under-19s’ run to European glory in the summer and already has 14 Premier League outings to his name.

The plan for Chukwuemeka, a dominant ball-carrier who resembles a young Ruben Loftus-Cheek, is to remain with Thomas Tuchel’s first team this season, although the occasional appearance in the PL2 is likely.

The youngest of the group, striker Shumaira Mheuka has not yet turned 15 but was part of Brighton’s Under-18 side last season. That’s not normal, and Chelsea know that.

Mheuka, who scored against Chelsea at Under-17 level last year, had suitors from all over Europe before choosing to join the Blues, where he is expected to spend plenty of time with the Under-18s.

He’s so young, in fact, that he is not eligible for the FA Youth Cup this year, so expect this prospect to split his time across the age groups.

A direct and dynamic attacking midfielder,16-year-old Tyler Dibling is the latest player to opt to continue his development at Chelsea.

The player in questions, good in dibbling, and he has against the Blues’ Under-17s, who joined from a Southampton academy that was very sorry to see him go.

When he is Under-18s and he make a lot of impact for the B team with three goals in a 4-2 win over Newcastle late last season.

Great target as the senior player, Ralph Hasenhuttl has made a lot exciting performances in the end of last season, while he generated fair-reward.