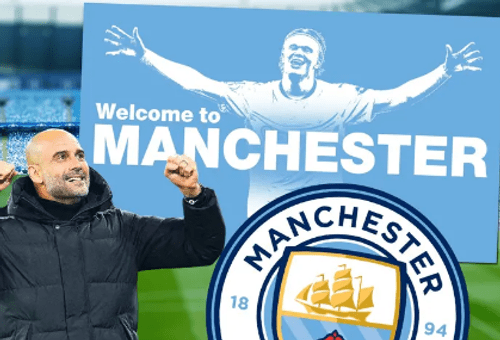 Goodnews as Erling Haaland complete his medical test today ad Manchester coach, Pep Guardiola welcome Haaland in the club in regard of the summer transfer update. City are reportedly about to bring a successful conclusion to their chase of Borussia Dortmund star Erling Haaland.

Manchester City are set to announce the signing of the Norway striker, 21, this week according to The Athletic.

Belgian outlet DH claim the 21-year-old completed a medical at a Brussels hospital on Monday.

“If Erling Haaland goes there, that will not weaken them. Definitely not.

“I know in the moment that other people talk about money, but this transfer will set new levels. Let me say this.”

Meanwhile, Manchester United ace Paul Pogba won’t be joining Haaland at the Etihad next season amid interest from Pep Guardiola’s side.

The France star looks set to leave Old Trafford this summer at the end of his contract.

But according to The Athletic’s David Ornstein, Pogba’s representatives have informed City he will be heading elsewhere.

However, French giants Paris Saint-Germain are favourites to sign Pogba, according to Betfair.

Mauricio Pochettino’s Ligue 1 champions best priced at 4/5 to secure the services of the midfielder. Elsewhere, Fulham have opened talks over a new deal for Tosin Adarabioyo to ward off any interest this summer.

The defender played almost every game as Marco Silva’s side won the Championship title at a canter but has just one year remaining on his current contract. Silva is now keen for the club to quickly tie the towering centre-back down to a fresh long-term deal.