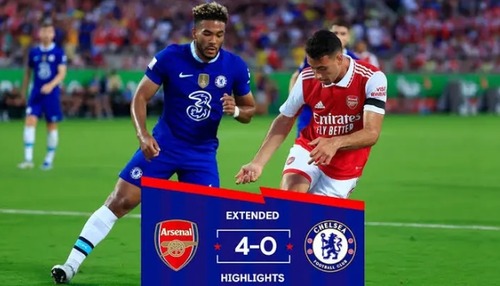 After facing an embarrassing 4-1 defeat against his former club Brighton last Saturday, Chelsea coach Graham Potter will have another hard task to prove his tactics in a London derby when his side will be hosting table toppers Arsenal. This game is not expected to be easy for both sides considering Arsenal’s in-form performance and Chelsea’s need to bounce back and remain in top four. Looking at Graham Potter’s squad, he actually has all it takes to beat Arsenal on Sunday despite having some absentees. How possibly could they line up to end Arsenal’s impressive performance? Let’s see a possible formation and line up below; Kepa Arizabalagha was substituted at half time in Brighton’s defeat and he is expected to miss Arsenal’s clash due to a slight injury. This leaves room for Eduardo Mendy to start in the goal post and secure the position. Wesley Fofana hasn’t returned since picking up an injury against AC Milan in champions league, hence Potter could go with a back three which comprises Trevor Chalobah, Thiago Silva and Kalidou Koulibay who will be taking the place of Marc Cucurella on the left side . Jorginho, Ben Chilwell and Cesar Azpilicueta didn’t make a start against Brighton but they could possibly return to the starting line up to face Arsenal. Matteo Kovacic could retain his position in the central midfield alongside Jorginho as Chilwell and Azpilicueta play as the wing backs. Pierre Emerick Aubameyang could possibly lead the frontline with support from the wings comprising of Christian Pulisic and Mason Mount. This could possibly make Chelsea’s attack a threat to Arsenal’s defence. Below is Chelsea’s possible line up that could give Arsenal a hard time;