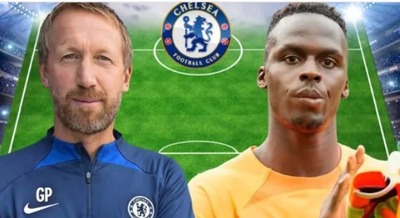 The Blues are keeping tabs on the French goalkeeper, who is regarded as one of Europe’s most promising young keepers, according to journalist Simon Phillips, who spoke with The Express.

Furthermore, it has been stated that those at Stamford Bridge believe the 22-year-old would be an excellent addition to the team.

Both Kepa and Mendy cannot claim to be Graham Potter’s ideal No. 1 for the position.

Despite the fact that the former is Potter’s first choice, a few solid performances during his time at Chelsea are insufficient to compensate for the majority of his poor work there.

Mendy’s play has deteriorated dramatically since the end of the previous season, and he even fell short of expectations while representing Senegal at the World Cup.

Chelsea are reportedly willing to let both Edouard Mendy and Kepa Arrizabalaga leave for a combined fee of £90 million in order to make room for Illan Meslier, according to a report from Media Foot.

This find demonstrates how serious the West Londoners are about improving their goalkeeping department.

To put it another way, Illan Meslier may be Leeds United’s most important player.

On numerous occasions, the French prodigy has saved the Whites from perilous situations.

Despite some criticism, Meslier is already on his way to becoming one of the best goalkeepers in the industry.

However, Leeds United should not consider Chelsea’s offer unless the Blues are willing to spend big money to pry him away from them.