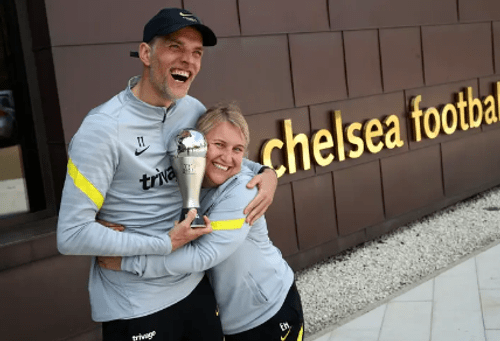 Can this hugged lead to something else as single Thomas Tuchel, spotted hugging Emma Hayes after FIFA award?. Chelsea completed a sweep of the FIFA Best coaching awards as Thomas Tuchel and Emma Hayes claim the respective prizes for men’s and women’s manager of the year. However, Chelsea men’s coach, Thomas Tuchel who is currently single after parting ways with his wife, Sissi of 13 years was spotted all smiles has he hugged Emma Hayes today, as they both show off their FIFA Best awards. Chelsea FC Women tweeted: “Best in the business!” alongside pictures of both Chelsea coaches, Thomas Tuchel and Emma Hayes hugging and showing off their FIFA Best awards. This tweet from Chelsea FC Women of Thomas Tuchel and Emma Hayes hugging and showing off their FIFA Best awards has attracted reactions from fans, as some has have claimed they are genuinely just besties, while have asked Chelsea to give them both a lifetime contract.

Here are some screenshots of reactions from fans: