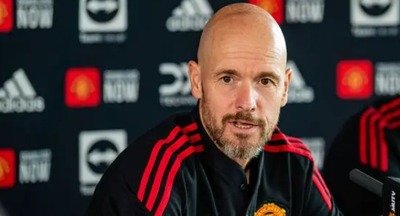 Erik Ten Hag, who is currently the Manchester United manager, hoping to get the possible replacement for Pep Guardiola as Manchester City manager, as he wait patiently to get the job soon.

Although, Ten Hag alongside with Pep Guardiola has worked with each other at Bayern Munich, as he said earlier this year that the Dutchman “could be the one” to succeed him at the Etihad.

No doubt, both managers will face each in the Manchester derby this Sunday. And ahead of the game, Ten Hag says he is happy with his decision to leave Ajax for United in the summer.

EPL: Erik Ten Hag statement about Manchester City that could come to pass

“That’s a nice compliment. But I was 100 per cent convinced to choose Man United, with everything in it. I didn’t regret it for one second.

“I admire Pep Guardiola a lot because he is not only successful, he is doing it in a certain way that really attracts people to football that is really a reward,” Ten Hag concluded.

One thought on “EPL: Ten Hag speaks on his chances to take over from Guardiola as Man City manager”