EPL: “Sell him off on load”- Chelsea fans blast player who angrily walk out of team after 2-1 defeats 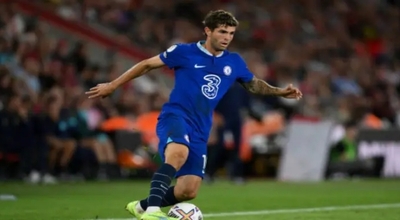 This has become a mixed reaction within Chelsea fans, a star player walk-out of team after 2-1 defeats by Southampton in yesterday’s match.

No doubt, Chelsea performances in yesterday’s match, has caused a lot of controversies among fans, as fan blasts players, especially, Koulibaly, saying, “No wins, just losses and red card, since his transfer summer at Stamford Bridge.

Chelsea star Christian Pulisic drew the wrath of Chelsea fans following his action after the 2-1 defeat away at the St Mary’s. Pulisic is seeking to leave Chelsea this summer, but his request has so far been rejected by the club, a move he’s displeased about.

After the defeat to Southampton, the American captain walked away from the fans who made the trip to Southampton, while the rest of the Chelsea team went to the away section to plead and appreciate the fans. Pulisic was seen heading straight down the tunnel immediately after the full-time whistle was blown.

This prompted some furious reactions from some fans with one saying ‘at least thank us’ while another wrote:

‘Shameful. He hasn’t played well in two years.’ Some fans claimed it was time to boot out Pulisic and also struggling Hakim Ziyech.

EPL: “I thought you’ll be a good player, I am disappointed”- Cascarino tells Pulisic

“Get them out of the club tomorrow morning on loans and deal with them next summer!”