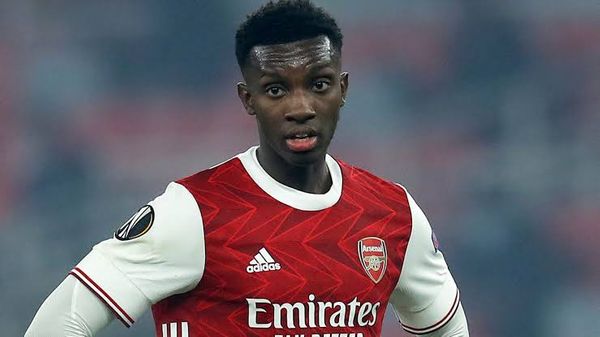 The youngest players among Arsenal, Eddie Nketiah, has been asked to leave the club this summer in order to give room for more football skills with other club.

Meanwhile, the striker was seen on Sunday with his physically skills of playing in the pitch, as Arsenal defeats Leeds United 2-1 at the Emirates stadium.

With the defeats 2-1 against Leeds United, it out Arteta’s side a great advantage to qualify for the UEFA Champions League next season, as they move 4th positions in the EPL table.

Nketiah, who is 22-year-old, his contract will end this summer, but, Mikel Arteta is planning to extend the striker contract. But, Jamie Carragher, Liverpool star, has advised Nketiah to leave the club in order to get the opportunities to advance to the next level of his football career.

Speaking on Sky Sports, he said,

“Yes should try to keep him, but I don’t think he’ll ever end up first-choice striker, so I think it would be better for him to move on.”

No doubt, the star player, Nketiah has scored 4 goals in his last four Premier League matches for Arsenal.This is why many club msnagers want him to joined their clubs.