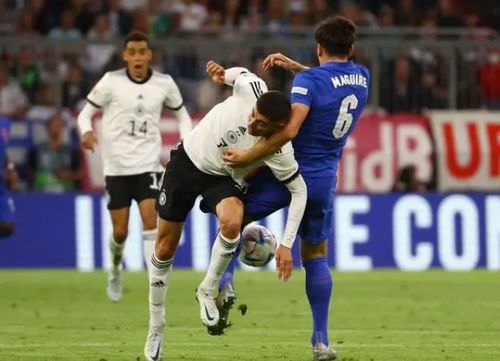 England fans have torn into Harry Maguire after he was left on the floor by Germany forward Kai Havertz during their Nations League clash.

Maguire tried to hold off Havertz as a long ball was sent forward towards him, but instead ended up falling to the ground after being out-muscled by his opponent. The error allowed Jonas Hoffman to run through on goal and score, but Maguire’s blushes were spared by the offside flag.

“Where was Maguire on that straight forward long ball. Got lucky there.” Another baffled supporter tweeted: “How Maguire is anywhere near that team is genuinely flabbergasting.”

“Maguire how you getting dashed by Kai Havertz he weighs like 8st,” asked another social media user. Another joked: “Havertz just sent Maguire back to Leicester city.”

The frustration of one was clear to see as they wrote:

“How can Southgate pick Maguire after the season he’s had. Use these games to get Tomori in the team.”

“Maguire is the definition of a clown. Needs to be a wrestler.” And a further one added: “Maguire getting bodied by Kai Havertz in midfield…..wonders never cease.”

Maguire has been a regular for his nation in recent years but endured a nightmare season as Manchester United captain. He looks set to lose the armband for his club. England boss Gareth Southgate has continued to stick by him, though, with the partnership with John Stones well-established heading into the World Cup later this year. The other centre-backs in his latest squad are Fiyako Tomori, Conor Coady and Marc Guehi.