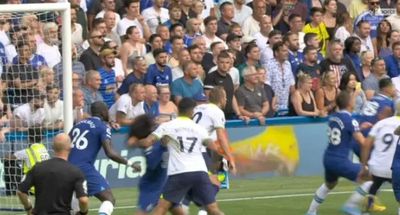 It was clear foul, and Referee was in the rightful position to see it and failed to do do, as VAR reviewed the incident but opted against taking any action.

Now, The Football Association have also decided not to take any further action, despite Chelsea Boss, Thomas Tuchel call for cancellation of that match.

Although, the FA Board has now charged both EPL rivals club coaches, Thomas Tuchel and Antonio Conte for improper conduct.

Tuchel seems to be at more risk of a sanction following his statement about referee Anthony Taylor.

The FA have opened an investigation into his comments following the match.

Thomas Tuchel was critical of both Anthony Taylor and VAR after the game.

Asked if Taylor should not referee Chelsea games, Tuchel said:

Tuchel also claimed his players were ‘worried’ about playing in matches officiated by Taylor, with Chelsea fans also not a fan of Taylor.

Asked about fans’ concerns, he added:

“Not only the fans. You know the players, they know what’s going on when they are on the pitch. They know it.”