Chelsea’s key player has not been active this season, “He is fasting,” Thomas Tuchel claimed 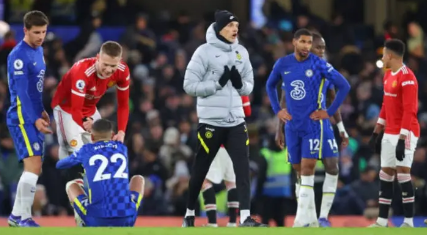 Chelsea’s key player has not been active this season, “He is fasting,” Thomas Tuchel claimed that N’Golo Kante has not been active in the previous seasons but remains a key player for the club. The 31-year-old has been at Chelsea since 2016 and on Wednesday, it was perhaps the first time he was subbed off at half-time due to tactical reasons.

The active midfielder, who had won back-to-back man of the match awards in the two legs of the semi-final tie against Real Madrid just a year ago, actually struggled against the same opponents.

Meanwhile, Tuchel believes that the midfielder’s performance is perfect- when asked in a press conference about Kante’s inconsistent performances recently.

According to Thomas Tuchel, he said;

“One thing that is very clear is that N’Golo is a key player because he has outstanding and unique qualities.

“N’Golo is a unique player who can give something that nobody else can to the team.

“He struggles this season with consistency due to injuries, illness — and this is also part of the reason for our inconsistency [as a team]. We lost him for so many matches.

“At the moment, he is fasting due to his religious belief, so maybe [it is] another reason.

“He’s not doing it for the first time, but if you don’t eat and drink during the day, it can have an effect.

“Maybe it’s part of the explanation why we had the feeling that he’s not at his highest level if you compare it to how big an influence he had in the last campaign against Real Madrid.”

Any clubs that had Kante’s in their team, would suffer if a player of Kante’s caliber could not perform as expected. Who relies heavily on his physical attributes and seemingly unlimited energy, the France international player, might have felt the effects of aging more than others too.