Chelsea team begins full preparations for the return of club football, there isn’t much to look forward to 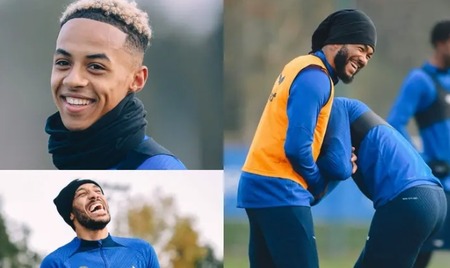 Chelsea football club players and management staffs where out in full force as they trained in a relatively cold Cobham centre today as they target full match fitness with club football set to resume.

The training session witnessed the return of players that participated at the on going FIFA world in Qatar, Kai Havertz, Christian Pulisic, Edouard Mendy and Kalidou Koulibaly where all present and below we are looking few things Chelsea fans could expect from their team going forward. Graham Potters philosophy in full flow. Defender Marc Cucurella spoke of how confident he is going into the next half of the season with plenty of time spent with the head coach during the world cup break, in that line Chelsea supporters could expect Graham potters philosophy to finally take off. A good atmosphere at Cobham centre via Twitter photos.

Broja sustains serious injury as Chelsea loses to Aston Villa
Attack improvements. One area the blues have suffered in recent times is in the attacking department, the long break gave the coach quality time to solve those puzzles especially with Pierre-Emerick Aubameyang staying at Cobham centre, expect goals in the second half of the season. Reece James is back and happy via Twitter photos.