Chelsea rebuild XI: How they could lineup in 2022/23 season with their summer targets 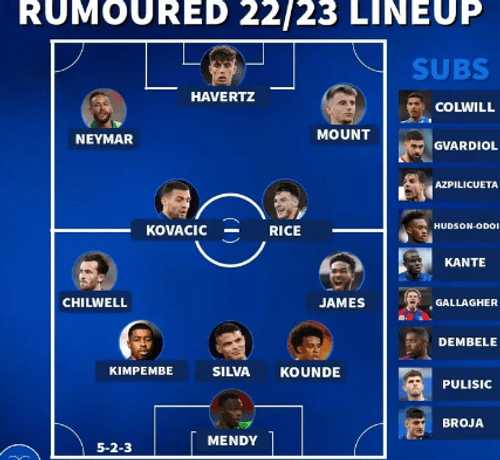 Chelsea might lose three or four top players this summer. They have already lost Antonio Rudiger to Real Madrid and there are rumors that Barcelona have already agreed personal terms with Christensen but can’t announce his signing yet because of financial fair play. There are sources that claimed Barcelona are also interested in signing Marcos Alonso and Cesar Azpilicueta this summer. Manchester united have been linked with Ngolo Kante but all these are transfer rumors and speculation as there are no direct contacts yet. The image below show show Chelsea could lineup next season with their summer targets. How Chelsea could lineup in the 2022/23 season with their summer targets. If Chelsea should lose majority of their Defenders this summer, they could sign Kimpembe and Kounde as Replacement. There are speculation that Paris Saint-Germain wants to offload some of their players and Chelsea could swoop in and acquire the services for Kimpembe as Rudiger’s replacement. There are also rumors that Paris Saint-Germain also want to sell Neymar and Chelsea could also sign him.

Chelsea also have the option to sign Dembele who have refused to refused to accept Barcelona’s renewal terms. They could sign him and use him as a back up for Mason Mount. However, since Manchester united are currently interested in securing the services of Ngolo Kante, Chelsea will need to sign a replacement should he leave this summer. Declan Rice is currently on Chelsea’s radar but other premier league clubs like Manchester city are also interested in the England midfielder. Chelsea might compete with other top clubs for Declan Rice’s signature. Which of these transfer rumors do you think will manifest?