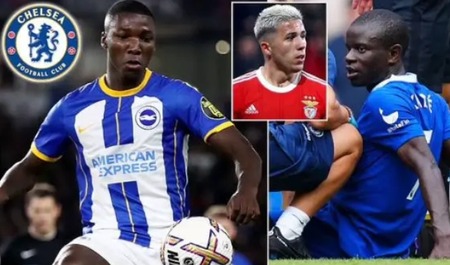 Chelsea are looking to picking up points in the Premier League campaign to at least get back to top four of the table. That was not possible in a step forward last night as they encountered a huge blow under the turf of Londoners Fulham on away soil. The blues suffered a direct red card to new signing João Felix who had a bad tackle to Fulham player in the second half. The latter joined from Atletico Madrid on a deal worth £9m but the Londoners will pay his £250k weekly wages as per Sunsport report. After missing out on £88m midfielder Enzo Fernandez from the Benfica side as per Daily Mail. The blues are pondering on then getting the signature of Moises Caicedo from Brighton.

Former Brighton manager Graham Potter once said the latter could as well cost the blues a whopping £42m as per Daily Mail. Kante has been injured for along time now and the manager in a bid to try boost his squad may seek the services of the Ecuador international who was impressive at the World Cup tournament in Qatar last year.