Chelsea: Graham Potter finally received the proper boost as he hopes to win the remaining matches 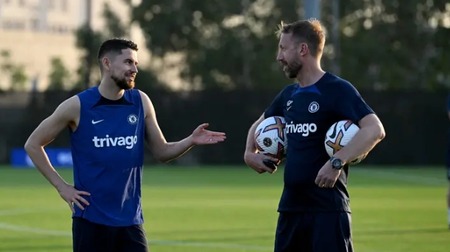 Chelsea midfielders Reece James and Ben Chilwell have resumed full training with the rest of the squad. Due to injuries, the pair has been unavailable for match selection in recent weeks, but they are in contention to start the next league match this weekend.

Graham Potter admitted in a recent interview that the return of the pair will serve as a springboard for Chelsea to climb further up the league table.

Mark my words: the return of both Chilwell and Reece James will be a watershed moment for Chelsea this season. The two have had a string of injuries, but their ability on the field has never been in doubt.

“All the improvisation in the back line will come to a halt, and Potter will have scratched one problem off his list,” predicted David O’Hara.

Lewis Hall has taken Ben Chilwell’s place, but he still has a lot to learn before making an impact in the Chelsea senior team. Marc Cucurella has been out of shape recently, which has caused him to miss a few matches in recent days in order to regain full fitness. Potter also thinks of him as a left center back rather than an offensive fullback.

Although Potter is finally seeing success, he will now be expected to deal with a new squad dilemma of allocating quality game time to every player on the team. The Premier League allows only 25 players to play for a single club throughout the season, which is a major issue for Potter right now.

Others may be scheduled for domestic cup matches and Champions League knockout matches, but missing 19 Premier League games will be devastating for some players.

Chelsea’s attacking and defensive lines are expected to be stronger because Chilwell and James provide offensive mindedness on both flanks.

They also have a good eye for goal and can easily score if given the right opportunity. Their quickness and positional awareness make them valuable assets both offensively and defensively.