Check out the five best goalkeepers in the World [Photos] 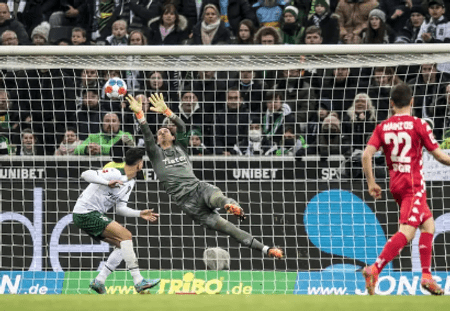 Here are the list of the best goalkeepers in the football world below;

Gregor Kobel is a 24-year-old Swiss professional footballer currently playing as a goalkeeper for the German club, Borussia Dortmund, and the national team of Switzerland. Born in Zürich, Switzerland, four years ago, Gregory made his first professional soccer career for 1899 Hoffenheim, starting in the first round of the 2017 to 2018 DFB-Pokal against Rot-Weiß Erfurt. He joined his current club, Borussia Dortmund, last year. With the Switzerland national team, he was, in 2021, called up to the national team for the 2020 UEFA European Championship, where the team created one of the main sensations of the tournament reaching the quarter-finals. He made his debut appearance in a friendly winning match against Greece.

Regarded as one of the current best goalkeepers in the world, Gregory is known for his discipline, intelligence, concentration, and professionalism. Gianluigi Donnarumma Cavaliere is a 23-year-old Italian professional soccer player who plays as a goalkeeper for the Ligue 1 club, Paris Saint-Germain, and the Italy national team. Born in Castellammare di Stabia, Italy, Gianluigi, coming through the team’s youth system, kicked off his professional soccer career with AC Milan in 2015, becoming the second youngest goalkeeper ever to debut in Serie A at the age of 16 years. In 2021, the talented goalkeeper helped Milan secure a second place finish in the 2020 to 2021 Serie A and qualification for the 2021 to 2022 UEFA Champions League.

Soar in his goalkeeping career, Gianluigi has won Serie A’s Best Goalkeeper of the Year, IFFHS World’s Best Goalkeeper, and the Yashin Trophy. After six years with Milan, he was signed to his current club, Paris Saint-Germain, last year. With the national team of Italy, Gianluigi, at the age of seventeen, made his senior international debut three years ago, making history as the youngest goalkeeper ever to play for Italy. He played for the country at the 2020 UEFA Euro, helping the team win the tournament and winning the Player of the Tournament award.

Regarded as one of the current best goalkeepers in the world, Gianluigi is renowned for his ball control and distribution, as well as his overall consistency, positioning, handling, punching technique, and his ability to defend crosses and command his box as areas in which he needs to improve as he gains more experience. Before moving to Italy, Handanović played in his home country of Slovenia. In 2004, he was signed by Udinese, but spent the next few years on loan, playing for teams such as Treviso, Lazio and Rimini. Handanović returned to Udinese ahead of 2007 to 2008 season, where he played as a starter for the next five years. In the next season, he also played European football for the first time, making his first appearance in the UEFA Cup. After five years as starter and more than two hundred appearances, Handanović joined Inter Milan in 2012. Three years ago, he was named club captain, while in September, he made his 300th appearance for the club, and subsequently went on to reach the 2020 UEFA Europa League Final that season. He is one of only four non-Italian keepers to be named Serie A Goalkeeper of the Year, winning the honour three times. A penalty saving specialist, during the 2010 to 2011 Serie A season, he saved a total of six penalty kicks, equalling an all-time league record set in the 1948 to 1949 season. During the 2019 to 2020 season, he equalled Gianluca Pagliuca’s record of most penalties saved in Serie A with his twenty fourth stop.

Regarded as one of the current best goalkeepers in the world, Handanović is renowned in particular for his outstanding reflexes, acrobatic saves and excellent shot-stopping abilities, as well as his positional sense, leadership, and ability to organise his defence. Koen Casteels is a Belgian professional soccer player currently playing as a goalkeeper for Wolfsburg and the Belgium national team. Casteels was first called up to the senior Belgium team nine years ago. Manager Roberto Martínez often chose four goalkeepers in his international selections, and as the 2018 FIFA World Cup only permitted three, Casteels battled with Matz Sels for the final space behind Thibaut Courtois and Simon Mignolet. He was eventually chosen for the final 23-man squad to go to Russia. Casteels made his first full international appearance two years in a winning match against Iceland for the UEFA Nations League.

Considered as one of the current best goalkeepers in the world, Casteels is renowned for his speed off his line and anticipation as a goalkeeper, which enables him to clear the ball away from danger, as well as his ability to get to ground quickly to parry or collect the ball, attributes which also make him particularly adept at stopping spot-kicks. Yann Sommer is a Swiss professional soccer player currently playing as a goalkeeper for the Bundesliga club, Borussia Mönchengladbach, and the Switzerland national team. Sommer started his professional football career with Basel, where he won the Swiss Super League on four consecutive occasions before transferring to Mönchengladbach eight years ago. He also won the Swiss Challenge League and two Liechtenstein Football Cups while on loan to Vaduz. With the Switzerland national team, Sommer made his first international appearance for the country ten years ago. He represented the nation at the FIFA World Cup in 2014 and 2018, and the UEFA European Championship in 2016 and 2020.

Regarded as one of the current best goalkeepers in the world, Sommer is known for his physical strength and technical abilities, mental composure, and decision making.