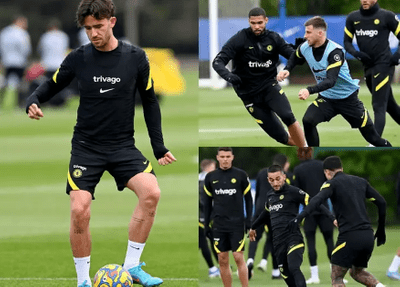 One of the best Coaches in the English Premier League, EPL, Thomas Tuchel has been strategizing on how to maintain or top the first-fourth positions in the club points in the EPL table in their next match as Chelsea will faces Manchester United at Old Trafford on Thursday.

Ben Chilwell, The 25-year-old left-back, who was ruled out for the season earlier in the year, threw his arms around the goalscorer as the pair beamed from ear to ear. Chilwell proceeded to shower Pulisic with praise before admitting to being camera shy due to his absence from the media limelight since his injury.

“You said saved us today bro,” the England international said, before giggles from Pulisic followed. “It was [a big win], it was. Big win. Long time since I’ve done this!”

Chilwell added by regathering his thoughts and replacing his arm around Pulisic. The Blues defender said:

“Always, always nervous,” he said, when asked what it’s like watching on from the sidelines. “The main thing today was the win so yeah, happy day.”

Speaking on Pulisic’s finish before wrapping his arm back around his teammate, Chilwell concluded:

Having missed a large chuck of the season through injury, Chilwell’s return is highly anticipated. In November, the defender suffered a knee ligament injury in Chelsea’s clash with Juventus at Stamford Bridge.

He was subsequently expected to miss the rest of the season. Last month, the club’s official Instagram account posted a photo of the full-back working on the training ground alongside the caption: “Upping those fitness levels! @benchilwell.”

Despite his steady return, Chilwell’s return date is still unknown although he will miss Chelsea’s clash with Manchester United on Thursday evening. Marcos Alonso, who impressed against West Ham, will likely feature amid growing concerns with Malang Sarr’s suitability.

Nevertheless, Chilwell’s return to the training pitch has been welcomed news amid a season blurred by setbacks for Thomas Tuchel’s side, on and off the pitch.

Since, Ben Chilwell and Christain Pulisic set-to partners if he fully joined the squad in their next matches, as the Blues is ready to face Manchester United at Old Trafford on Thursday with a kick-off time at 7:45 p.m.

But, Ben Chilwell returning to the Blues squads, can this bring a positive change for Chelsea to win all their remaining matches before the end of this season or not?.

Because, having Manchester United vs Chelsea match will be a tougher match to watch as both teams will struggle to get a points in the EPL table.