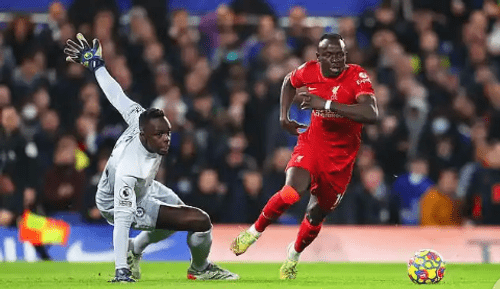 Chelsea and Senegal Goalkeeper, Edouard Mendy send strong message to Liverpool star player, Sadio Mane, as he. Say, he should have been sent off in Chelsea’s clash with Liverpool. The Liverpool forward caught Cesar Azpilicueta with an elbow just six seconds into the 2-2 draw which took place at Stamford Bridge.

Just hours after Mane scored past Mendy to put Liverpool ahead in the contest, the pair have been pictured together on the plane as they jet off for the Africa Cup of Nations.

Edouard Mendy says Sadio Mane should have been sent off for an elbow on Cesar Azpilicueta. Chelsea 2-2 Liverpool: Mateo Kovacic and Christian Pulisic rescue Blues with quickfire strikes as Reds squander a two-goal lead after Sadio Mane and Mo Salah had put them ahead… leaving Manchester City TEN points clear at the top

Mateo Kovacic’s stunning goal helped a Chelsea side lacking direction and control fight back against Liverpool, and summoned up memories of Eric Cantona’s FA Cup final winner – it may also help cost the Reds the title.

‘It’s a CLEAR red card!’ Cesar Azpilicueta left furious afterLiverpool’s Sadio Mane was not sent off for elbowing him in opening seconds of Chelsea’s draw, before he hits out at lack of consistency from top-flight officials.

Thomas Tuchel left stunned after claiming VAR did NOT check Sadio Mane’s controversial elbow on Chelsea defender Cesar Azpilicueta for a red card, and that the Liverpool forward was fortunate not to be sent off. An action packed match started with Mane receiving the fastest recorded booking in Premier League history.

A long ball was played out to Mane on the left who caught Azpilicueta while they both went to meet it.

Mane received a yellow card though Azpilicueta said after the game that it was a ‘clear red,’ while Chelsea boss Thomas Tuchel was left stunned after claiming that VAR did not check the incident.

Mendy was also asked for his opinion after the game on whether his international teammate should have been given his marching orders.

‘Sadio is my brother, my compatriot. But he should not have stayed on the pitch after one minute.’

Despite his comments it was all-smiles for the pair as Mendy shared a picture on Instagram of the pair heading off to the African Cup of Nations which takes place in Cameroon.

Mane rounded Mendy before opening the scoring for Liverpool in a 2-2 draw in the capital. They will go from opponents to teammates with Senegal’s first match taking place on January 10 against Zimbabwe.

The Liverpool forward opened the scoring after nine minutes against Chelsea when he capitalised on a mistake from Trevoh Chalobah and rounded his international team-mate before coolly slotting away.

Mo Salah made it 2-0 before a Mateo Kovacic stunner and a goal from Christian Pulisic levelled the score just before half-time.

The game finished as a 2-2 draw – a result which does neither side any favours with Manchester City now ten points clear at the top of the Premier League.

Mendy will face his Senegalese teammate Mane at Wembley in the FA Cup final on May 14, after Chelsea lost to Liverpool in the Carabao Cup final which ended in favour of the Reds after penalty shootout.