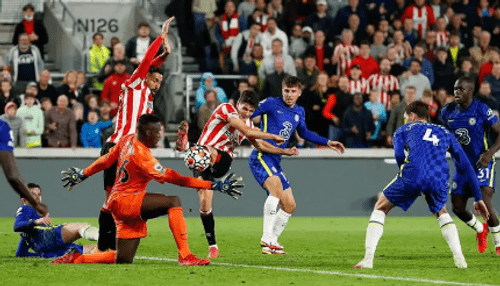 Chelsea’s next premier league fixture will take place at Stamford Bridge on Saturday afternoon. Thomas Tuchel’s side will face a resilient Brentford team as the Premier League resumes this weekend. In the last five games between both sides, Chelsea has won four games and drawn once. This suggests that Chelsea are the clear favorites to secure a win against Brentford this weekend. Thomas Tuchel’s side will not have to worry about any major injury concerns as they have enough squad depth that could take on their opponent. The image below depicts how Chelsea could possibly line up against Brentford at Stamford bridge. Thomas Tuchel’s defensive combination will allow his team to dominate the Midfield by allowing the full-backs to drive deep into the wide areas of the midfield. However, Pulisic activities with Hudson Odoi at the left side of the pitch will help Chelsea to invade Brentford’s final third from the right-wing. Werner’s ability to wriggle through pocket spaces left by the defenders-, will be the key to unlocking Brentford’s compact defense.