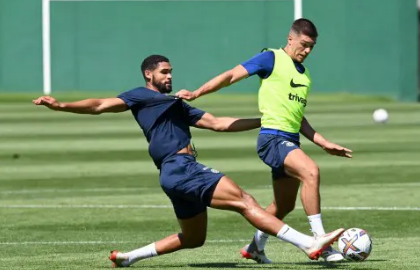 Here are some of the key reports from the match:-

*Not all key players were available for selection, as most of them are yet to resume. Some of the senior key players that were available and featured in the match include Trevoh Chalobah, Kepa Arrizabalaga, Ruben Loftus-Cheek, Ross Barkley, and Hakim Ziyech. * As reported some academy players were given game time to shine in the friendly match.

*Some of the returning loanees that featured in the game include Tino Anjorin, Mason Burstow, Ian Maatsen and Dujon Sterling, Lewis Hall, and Charlie Webster. * Injured players who didn’t play a lot last season featured in the game. Callum Hudson-Odoi and Ben Chilwell were featured, which is good news ahead of the new season. * Not much detail was released on how the match went but it was reported that there were at least three goals scored with Chilwell netting early in the game and Hakim Ziyech scoring twice and assisting once. Loftus Cheek and Barkley also impressed as they both got an assist in the match.

*The rest of the squad, including those who played post-season matches for their national teams, will return ahead of the pre-season tour. Chelsea is set to depart for North America on Saturday as they prepare to face Club America, Charlotte FC, and Arsenal on their tour before facing Udinese in pre-season later on in Italy.