BAY 2-BAR 0: Lewandowski frustrated in yesterday’s game after failing to score against his former club 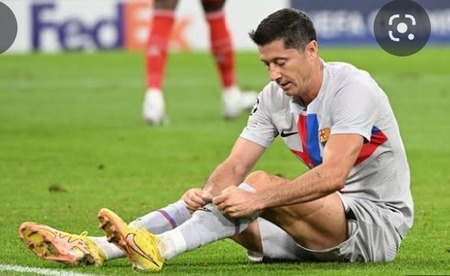 Barcelona’s forward, Robert Lewandowski probably suffered his biggest humiliation after he wasted all the chances he had to score against his former club, Bayern Munich in their second UEFA Group

At the 18th minutes, Lewandowski wasted a clear chance after Gavi crossed a ball to him, but off it wen over the crossbar. Out of the 7 shots he managed to put, the 34-year-old Poland captain, was unsuccessful, resulting to disappointment to his fans, who were positive that he would put a goal against his former club.

After the end of the match, Lewandowski immediately left the Allianz Arena, with his only words the reporters being,

“It wasn’t that easy.

“I’m angry. Angry and proud too. We were better … we dominated the ball … but this is about winning . The result is bad … I don’t like losing and we didn’t deserve it … You leave with a 2-0 which is not what happens on the pitch, but this is the Champions League,” Xavi said after the match.