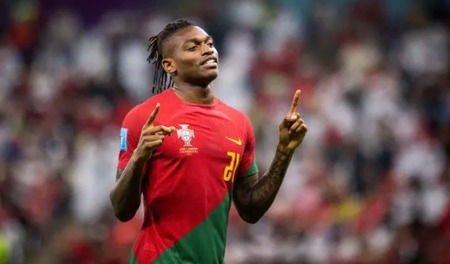 According to reports, Chelsea is interested in pursuing deals for two of Arsenal’s top transfer targets, Dusan Vlahovic and Mykhaylo Mudryk.

However, new Chelsea owner Todd Boehly has several names linked with a move to Stamford Bridge ahead of the January transfer window.

Arsenal are also rumored to be looking to add players in January, particularly now that Gabriel Jesus is expected to be out for several months, with Juventus striker Vlahovic and Shakhtar Donetsk winger.

The Gunners are looking to maintain their lead at the top of the Premier League table, but they may face stiff competition from Chelsea, who are looking to strengthen their forward line.

According to reports, Arsenal made a “sensational request” to Juventus to bring Vlahovic to the Emirates Stadium in exchange for Gunners center-back Gabriel Magalhaes.

There are rumours Vlahovic would set potential suitors back around €80m, while a deal could be done for Mudryk at around €60m despite Shakhtar’s insistence they want €100m for him.

“Sources say privately they will entertain offers of €60m+,” Jacobs said about Mudryk.

“That’s double Everton’s offer last summer. Back then, Everton and Brentford were the Premier League clubs most interested in signing Mudryk. Arsenal inquired but did not bid. They are now intent on making a formal offer.

“Contrary to popular belief, nothing has yet been tabled. However, discussions are continuing and progressing. Mudryk wants Arsenal, so the question now is whether a deal is financially feasible. Shakhtar are tenacious bargainers.

“Mudryk has spoken with Oleksandr Zinchenko about the club and is a big fan of Arsenal’s style. Mikel Arteta, meanwhile, believes he can be developed into a more versatile winger.

Supposing Rafael Leao score in yesterday’s game, Chelsea would have been in a big trouble- Thiago Silva

Shakhtar have always been braced for a winter exit, but hope Mudryk’s excellent Champions League form will get them the valuation they seek.”

According to Calciomercato, a ‘earthquake at Juve could convince Vlahovic to change clubs,’ with Chelsea ‘evaluating his profile’ as they consider a bid.

Chelsea have also’matched’ Mudryk as a potential signing, but the Italian publication admits that Arsenal remain ‘on pole’ for the 21-year-old.

According to Calciomercato, Chelsea have ‘turned to’ AC Milan forward Rafael Leao for the time being, with the Blues ‘not easily frightened’ by his €80m price tag.

Chelsea is currently preparing their budget for potential signings but will ‘wait and see’ how Leao’s situation develops.