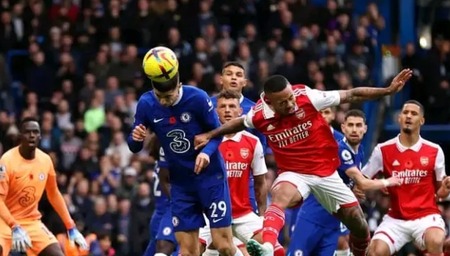 The Gunners were in action yesterday against Chelsea at Stamford Bridge as they aim to maintain their good run this season. They have kicked off this season with a good run where they have maintain the top of the table. In that match, they all created multiple changes in the early minutes of the game. The match was goalless until In the second half where Gabriel Magalhaes opened the scoring in the 63rd minute. The Blues tried to pull one back but the Gunners defence remained solid. Arsenal ended up winning all the three points by the end of the final whistle. In that match, Chelsea forwards Aubameyang and Rahim Sterling tried all means to unlock Arsenal defence but William Saliba couldn’t give them a chance. Saliba has been on top form since the beginning of this season. He has become one of the key player for the Gunners where he has helped their defence fo remain solid. In yesterday’s match he gave Aubameyang and Sterling a headache to unlock their defence. These two Chelsea forwards are known to be some of the best strikers. However yesterday Saliba gave them no chance.

This now means that William Saliba managed to silence Aubameyang and Sterling after yesterday’s match.