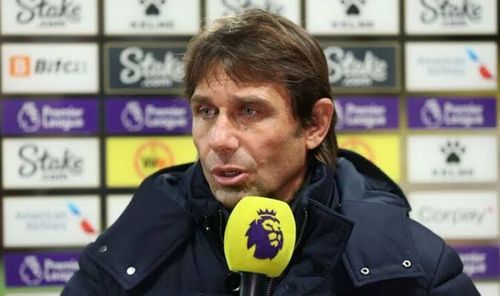 Even though he did not call a spade a spade, Antonio Conte’s statement spoken ahead of their premier league shutdown against Wolverhampton Wonders contains some fear in it.

Antonio Conte is expected to organize his star stunned Tottenham Hotspur team as he is set to welcome Bruno Lage’s side in what is seen as their third premier league outing in the new season.

The Lilywhites are coming to this match a stronger side after finding comfortable 4-1 win against Southampton and forcing Chelsea with a draw in the dying minutes of the game. Wolverhampton Wonders on the other hand have only recorded a single point in their last two matches.

Speaking ahead of this thriller, Antonio Conte who is anticipated to have a successful season this year following his business in the summer has heaped praises on his feared rivals, but singled out Ruben Neves for special praises.

It was during this time that the Italian chief showed his fear by saying that this game against Wolverhampton will be difficult for them.

Great news at this moment, to all Chelsea fans as Antonio Conte admits Chelsea better than Spurs, despite 2-2 draws

“It means that they have a lot of ambition, I have a great respect for Wolverhampton and their players, Ruben Neves and many, many good players with a good coach. I give great respect to them because they are doing very well and for sure the game will be difficult for us.” Conte said.