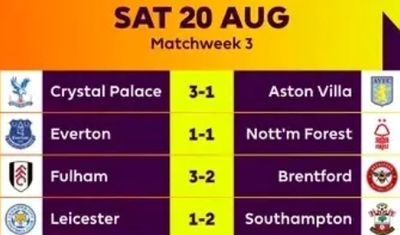 Leceister City were stunned 2-1 at King Power Stadium by Southampton, goals courtesy of Che Adams who netted a double Maddisson scored consolation goal for the Foxes. Crystal Palace crushed Aston Villa 3-1 at Selhurst Park, goals courtesy of Mateta and Wilfred Zaha (scored a double) while Ollie Wtakins scored the consolation goal for Aston Villa as they dropped to position 14 with 3 points. Everton were held into a 1-1 draw at Goodison Park by Nottingham Forest, goals courtesy of Johson for the visitors and Gray for the Toffees. After the 1-1 draw, Everton moved up to position 16 with 1 point while Nottingham Forest climbed up to position 11 in the EPL table with 4 points.

Fulham demolished Brentford 3-2 at Craven Cottage, goals courtesy of Mitrovic, Reid and Palhinha while the Bees goals were scored by Norgaard and Ivan Toney to denie the hosts a clean sheet. After the 3-2 win, Fulham climbed up to position 4 in the Premier League table with 5 points while Brentford dropped to position 5 with 4 points.